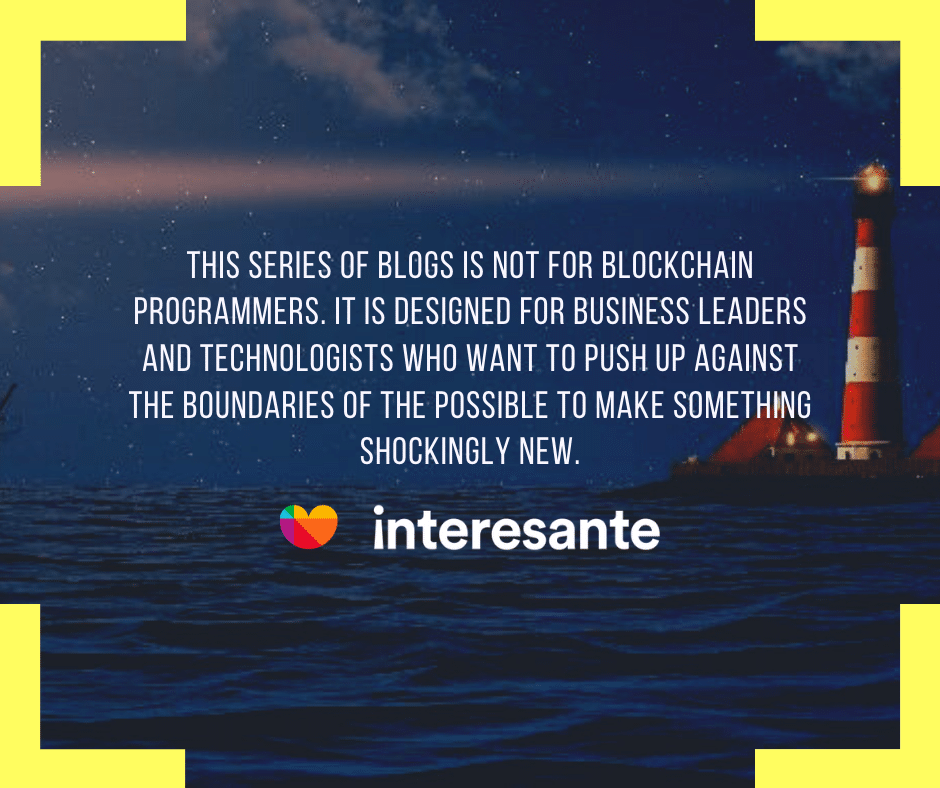 The first post in this series made a case for Kubernetes as a Platform to simplify the creation of blockchain applications.

Business leaders should feel a sense of urgency about getting up to speed with its potential, given its rate of adoption and the size of the emerging market.

Editorial Note: This series of blogs is designed for business leaders and technologists who want to push up against the boundaries of possibility to make something new.

In 1980, there were probably no more than one million personal computers in operation in the US. That number is surprisingly high because the entire notion of a “personal computer” was only five years old. You had to buy a DIY kit and build it yourself with keyboards, a power supply, and an enclosure for the motherboard (not to mention a monitor) sold separately.

The point of this time travel expedition is how that moment correlates to where blockchain stands today. Few understand it, and even fewer can explain it to non-technical coworkers. Although blockchain learning resources and communities abound, it still takes an impressive capacity for the imagination to develop an original, commercial use case for the technology.

One of the critical strengths of Kubernetes is its ability to provide variable development environments for cloud-native apps. It makes it easy to move between public and private clouds, and trace failures to modular infrastructure components.

On the other hand, the difficulties companies have faced in deploying Kubernetes vary based on the company’s size. The larger the company, the more likely they will see problems related to the complexity of managing containers as the critical challenge.

In response, developers at Google and Deis introduced Kubernetes Helm in 2016 as a package manager for Kubernetes. It simplifies organizing containers and related Kubernetes objects in a microservices’ architecture.

Packages of pre-configured Kubernetes resources in Helm are called Helm charts. In this context, a release refers to a specific instance of a chart that has been deployed to the cluster using Helm. A repository is a group of charts made freely available to the broader development community.

Helm grants your team tighter control over clusters that can include objects like ConfigMaps, Persistent Volumes, pods, and many others. Using Helm as the package manager, you can create a one-click deployment package to provision containers everywhere. If you are a SaaS vendor, Helm can distribute containerized Kubernetes applications on-demand in either a dev-test or a production environment.

Once your Kubernetes application deployments are standardized and easily replicated through Helm, your developer can spend more productive time coding. At the same time, you are improving the customer experience by making it easier for them to start testing out original software faster. Your packages will generate measurable value for digital ecosystem partners in the blockchain and Kubernetes communities on the back end.

Webjet is an online travel agency covering Australia and New Zealand. They partnered with Microsoft to create a blockchain application to handle the processing and management of automated travel arrangements.

Thousands of bits of data related to hotel reservations and customer travel plans come through the Webjet online portal. Due to inefficiencies and delays in data processing, they migrated their entire infrastructure to Kubernetes, using Helm to manage a private Ethereum network.

Load balancing across containers and constantly upgrading services were problematic before they turned to Kubernetes to automate the deployment, scale, and orchestrate their data control applications. Webjet was then able to scale up and down with greatly simplified processes for rolling upgrades.

They built the following architecture to map a private Ethereum network to constructs in Kubernetes:

Helm was instrumental in breaking down the multivariate project into a series of charts that operate as individually manageable units. Each Helm chart was then able to be upgradable in isolation. You can see above that Webjet built one Helm chart for their Ethereum network, including Miners, EthStats, Bootnode, and another for just deploying Storage using SQL. Although they operated independently in a microservices’ architecture, some artifacts were shared across Helm charts, including services like Secrets, ConfigMaps, etc.

Today, Webjet relies on this private Ethereum network running inside a Kubernetes cluster to manage spikes and dips of data in real-time, without spending all of their IT resources maintaining the network.

Speed and New Sources of Revenue

In their 2018 Blockchain Survey, Deloitte reported that the top two reasons business leaders are increasing investment in blockchain for the coming year are that it brings the software to market much faster. It opens up new, disruptive lines of business.

The world hasn’t yet seen the equivalent of the Apple Macintosh, which made personal computers comfortable for the average non-technical user. That’s just one of many possible applications of blockchain that is merely waiting for someone clever enough to crack it.