Inicio | Technology | What Is A Venture Studio? 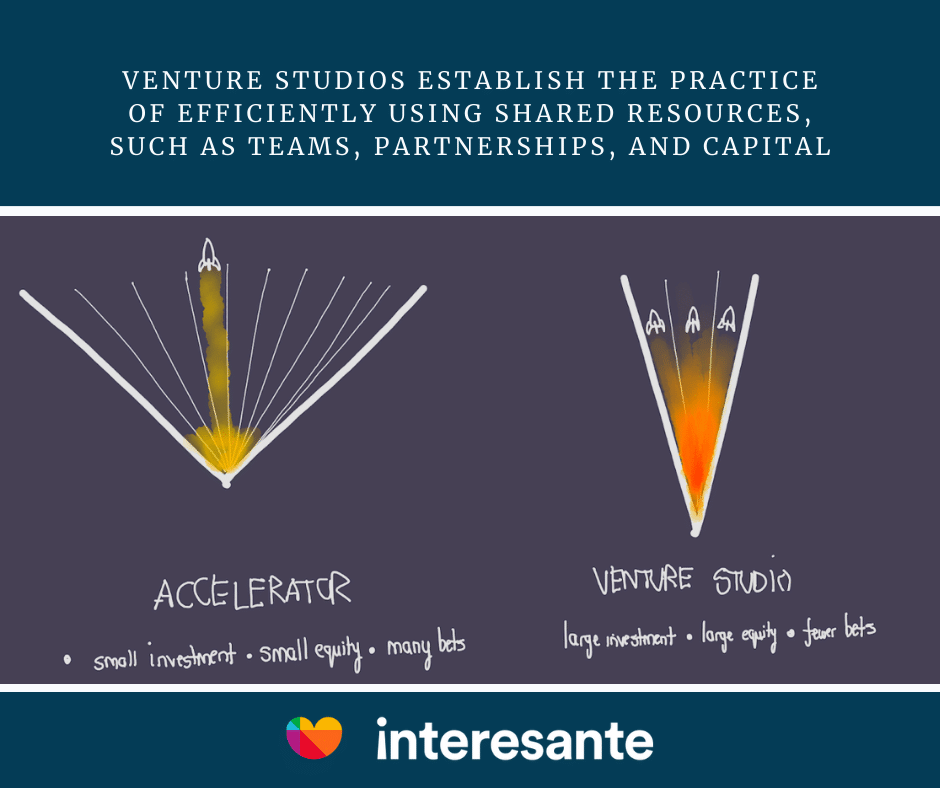 1.
What is a Venture Studio?

2.
How do Venture Studios Work?

Venture Studios work alongside product or business teams to iterate quickly in order to validate the product-market fit. Once the prototype is ready, the venture studio assigns teams to develop the product. Venture Studios often see an idea through from conception to a successful company.

Chris Collins, entrepreneur, and former Human Ventures principal wrote that «as the collective track record for Venture Studios continues to validate itself, Venture Studios will proliferate within the startup ecosystem.»

Taking his idea further, I believe that Startup Studios are well-suited to provide a much-needed innovation boost for corporations. For instance, if Blockbuster had created a startup studio staffed with entrepreneurs and intrapreneurs, it would’ve been much harder for Netflix to beat them out of the movie-rental business.

Corporate Venture Studios are well-positioned to assist corporations to clear up their blind spots.

3.
How are Venture (Startup) Studios different?

Venture (Startup) Studios are laser-focused on the team, quality, scale, and capital. Simplifying to the core, a Corporate Venture Studio is a business venture within a corporation that behaves as a separate entity while drawing resources from the parent entity.

Venture Studio operators have worked extensively within a familiar ecosystem. Let’s look at the beauty industry as an example. Lead by Tracy Holland, HatchBeauty Brands is an organization that demonstrates the influential work that Venture (Startup) Studios can deliver even in crowded markets. Tangelo works with beauty brands as well and we understand what it takes to compete with established brands in the beauty industry.

According to Steve Gotz from Silicon Foundry, Venture Studios have an additional key quality: the ability to intentionally create exceptionally talented teams of entrepreneurial operators and point them, with a laser-like focus, at the most pressing challenges and largest growth opportunities.

Furthermore, A Startup Studio differentiates itself from classic VC firms because they own the idea in partnership with the entrepreneur rather than as an external investor.

4.
What’s the difference between Venture Studios and VCs?

Jam City and Rovio are game development studios that have launched a combined 45 high profile games. Angry Birds being the runaway success for Rovio. Many people don’t know that Rovio launched at least 51 failed games before hitting it big with Angry Birds. Looking at Hollywood Movie Studios, we see a similar pattern.

Selling Cookies Was Hard. Here’s What I Learned at 11 Years Old

Movie Studios are famous for launching movies that make hundreds of millions at the box office. What’s not publicized is the rate of failure that goes into making one blockbuster movie a year. Actually, most films lose money, and as Hollywood continues to make around 700 films per year, 80% fail.

Silicon Valley VCs’ goal is to choose the startups that they believe will turn into a unicorn (Silicon Valley parlance for a blockbuster.) VCs depend on their network and their instincts. This is evocative of the Hollywood Blockbuster model, and though most VCs come from top universities such as Stanford and Harvard, the rate of failure is astounding.

Only 10% of startups succeed, while the rest, a whopping 90%, fail mainly due to four factors: timing, premature scaling, lack of industry expertise, and capital.

A Startup Studio can only make a fraction of the commitments that a VC firm does; however, those startups’ engagement level is much more profound. The startups seeking to collaborate with a Venture Studio have also done a lot of work before starting the collaboration.

The risk level is lower because the founders already have traction and know the market intimately. When the Startup Studio comes into the picture, the venture has already proven the product-market fit. At this point, entrepreneurs have to choose between a classic VC firm or a Venture Studio. Instead of getting investment capital from a VC firm, they might choose to go with a Startup Studio that operates within their industry and provides capital investments.

The Ultimate Pitch Deck For Your Startup